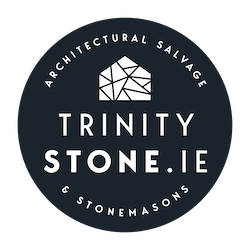 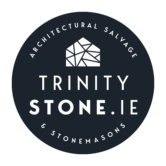 These rare granite stone gables are the two ends of the original waiting room on the northbound platform of the old Harcourt Street railway line.The Station was built by Architect William Dargan in 1854. The line closed in 1958 and the site of the station line lay dormant until it was demolished in the 1990s for redevelopment. The gables were purchased as part of a deal with the Connors family of travellers to vacate the site (which was then bulldozed) at that time. They were later offered back to the engineers of the Luas Line 2002/2003 but deemed out of keeping with the new bridge and platform of the stop despite the original access steps being retained. Ironically the new Cable Stay bridge in Dundrum is named after William Dargan as arguably the most important Irish Engineer of the 19th century.
Rough dimensions are 3.2 m high and 2.3 m wide.

STAY UP TO DATE

All size orders of salvaged stone delivered all over the country.

Stemming from a love of artisan craftsmanship, our work is our word.

By recycling and reusing we’re caring for our planet.